East Credit is a massive neighhood with a rich multi-cultural makeup and a true suburban feel. It has a public golf course smack dab in the middle of it, too. The number of households in East Credit is a whopping 16,400, and only a small amount (10%) are renters. The average household income in East Credit makes fans of The Great One smile – it’s 99K.

Hurontario is a large neighbourhood just north of Square One, and is close to most of the corporate headquarters situated in Mississauga. The City of Mississauga has put up signs in this neighbourhood claiming it to be “Britannia”… but since the big real estate websites like MLS and Zoocasa are calling it “Hurontario”, I fear that the City is fighting a losing battle. The number of households in Hurontario is 18,000 and a decent amount (20%) are renters. The average household income in Hurontario is 91K.

The nearest GO stations to Hurontario are …. well……. well there really aren’t any, OK? So if you want to take the GO Train somewhere, ummmmmmmm…….. don’t live here. 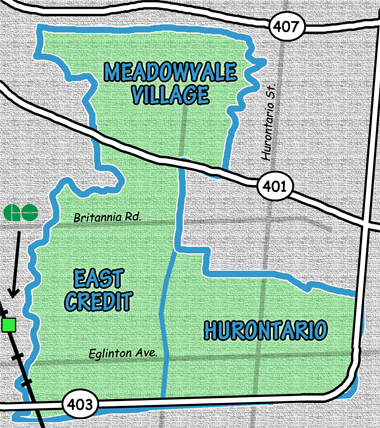